How to Record Acoustic Guitar and Vocals at the Same Time

Often the situation comes up where the acoustic guitar player is also the singer and he or she wants to sing and play live. Which is actually a great thing for the feel if you can capture it.

Of course the problem is, when you get to mixing, being able to separate the voice from the acoustic guitar. (i.e…) if you want to treat them differently if you want a different amount of fx on the voice (etc…)

And what usually happens is, and I’ve had to mix a lot of things, from a lot of artist where, both mics pretty much sound the same. They both have…
Sometimes the acoustic guitar mic will have more voice on it than acoustic guitar and it gets to be real problem in the mix. I’ve figured out a technique that actually works quite well.

As you can see, I have the U87 pointing up. I mean it’s really pointing up below the singers chin here. So, it’s rejecting the acoustic guitar because it’s in cardioid pattern. And then, this another mic, a smaller diaphragm condenser, it’s a KM84 Neumann. But it’s a great sounding acoustic guitar mic. It just happens to work really well. But it’s pointing, almost straight down. I mean, more than a 45 degree angle down. Probably more like a 60 degree angle maybe, directly at the hole, and it’s pretty close.

It’s incredible how well this works and you get a fairly well isolated voice and acoustic guitar by using this technique. It looks a little odd, and the singers might think, “that’s weird why is the mic pointing up my nose?”, but it still sounds good! And of course it’s important to use a windscreen if somebody is singing to avoid those pops. I’ve done this quite a bit with a few artist that I’ve recorded. Jonathan Brooke being one of them, who always plays and sings at the same time, and it really works well. 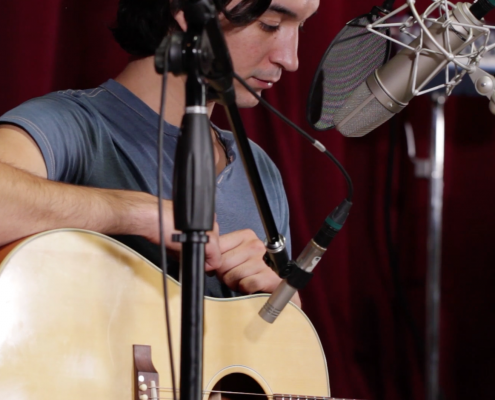 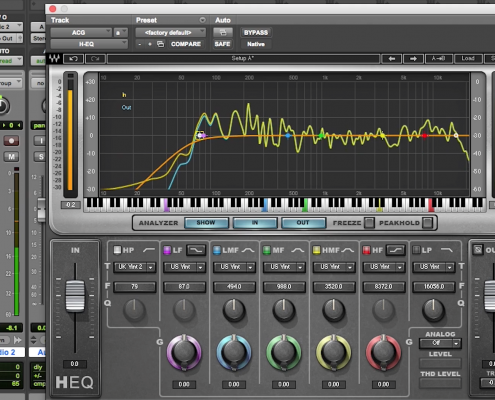 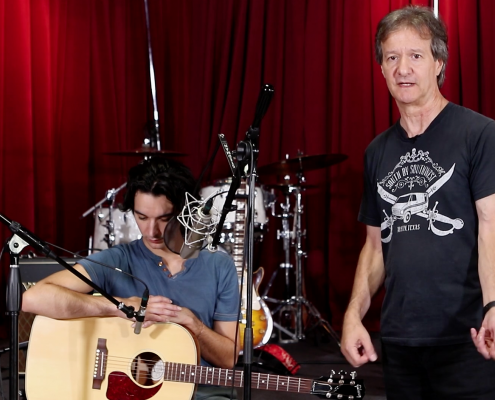