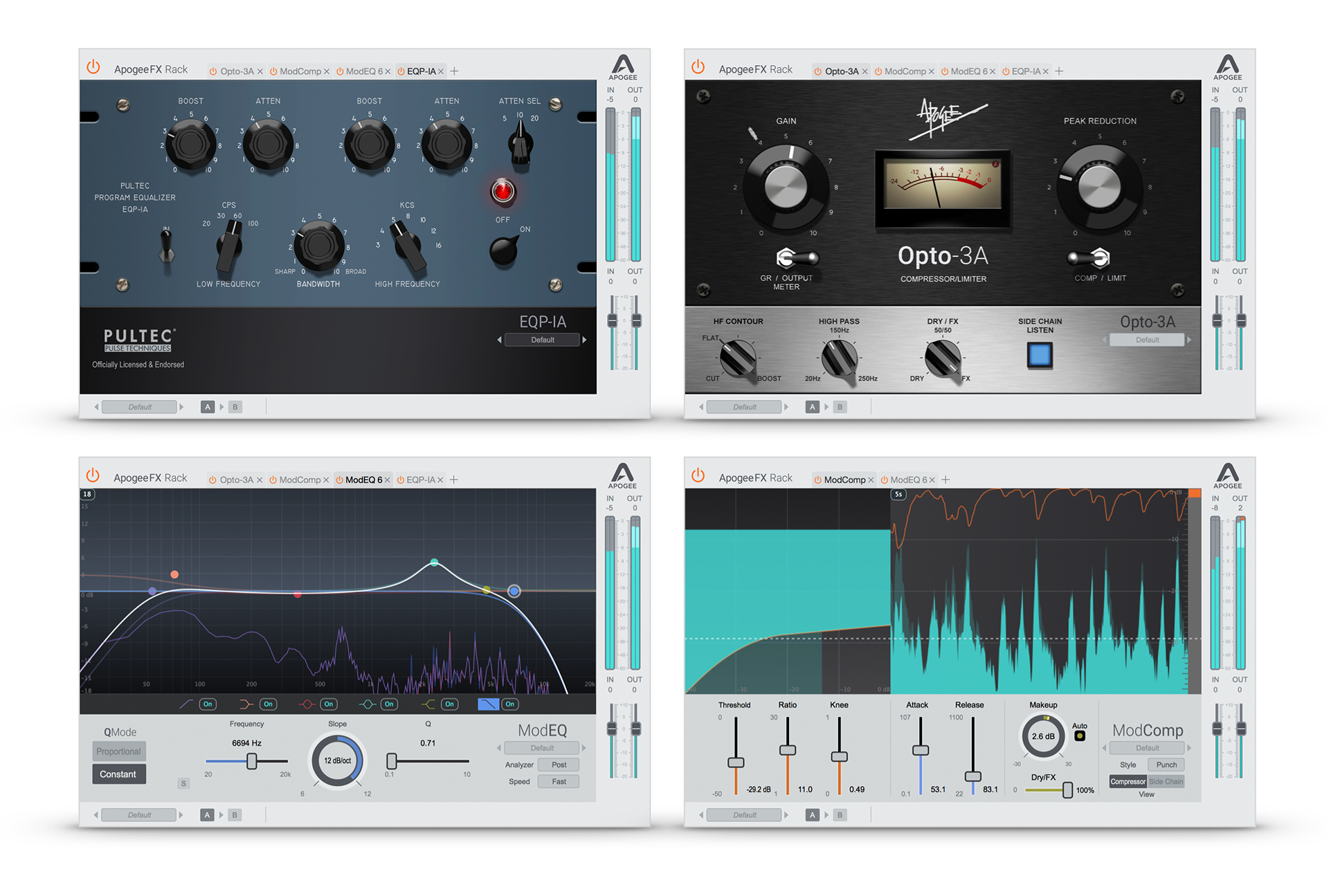 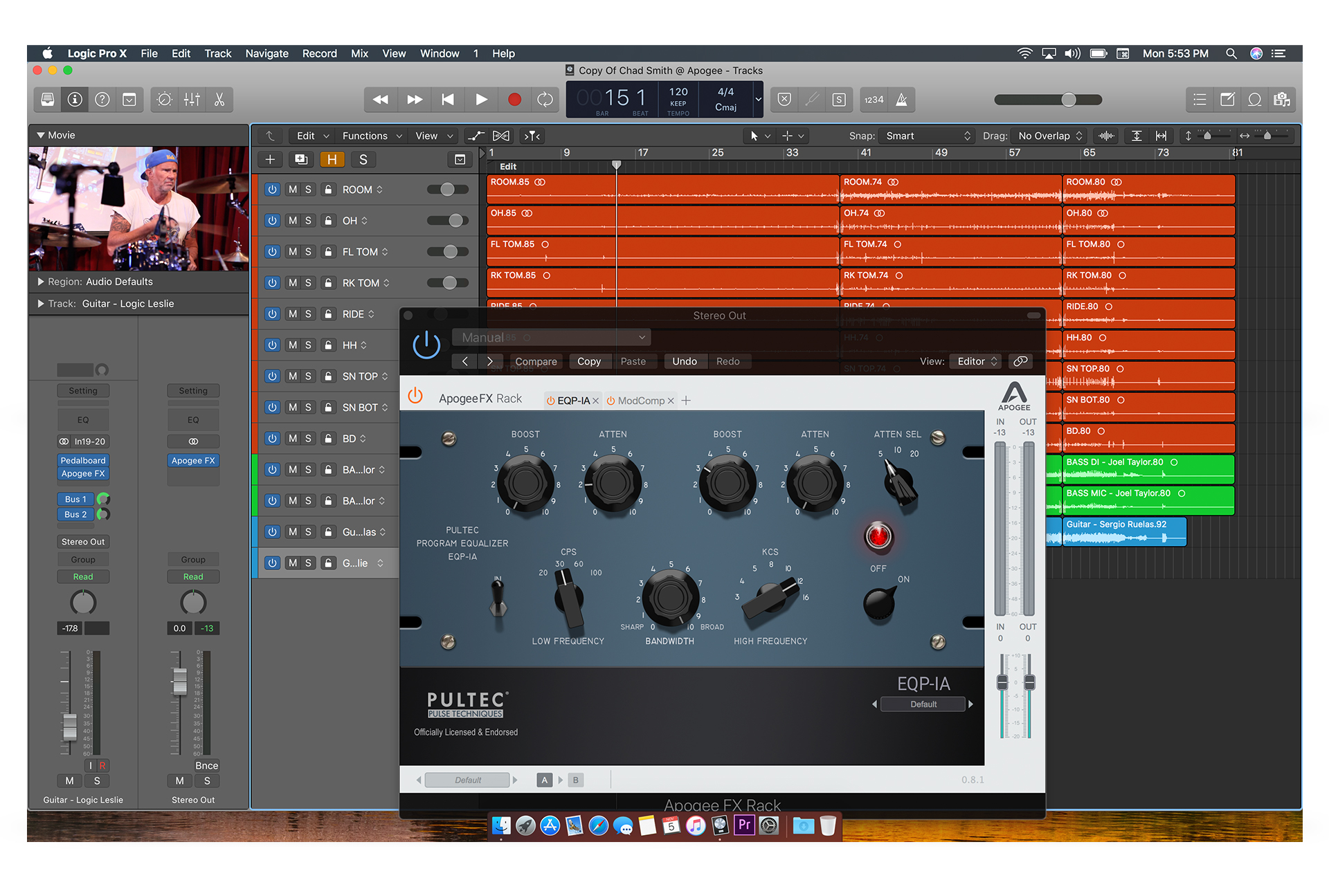 Attended by 60 invite only guests from audio engineering programs, visitors were able to fully immerse themselves in a ‘fly on the wall’ recording experience with these two industry legends.  Chad explained his DW drum setup and how he tunes his kit for recording, while Bob explained his microphone choices and placement techniques using the unique microphone setups from his extensive collection that he has curated for over 40 years.

The sessions were captured with Apogee’s Element and Ensemble units feeding Apple’s Logic Pro X as well as Avid’s ProTools workstations.  Audio was processed using Apogee’s all new FX Rack Plugins and the results were compared to the classic sound of Bob’s Neve 8068 recording console.

You can download the Logic X session from the event and try Apogee FX Rack plugins for free from the links above. 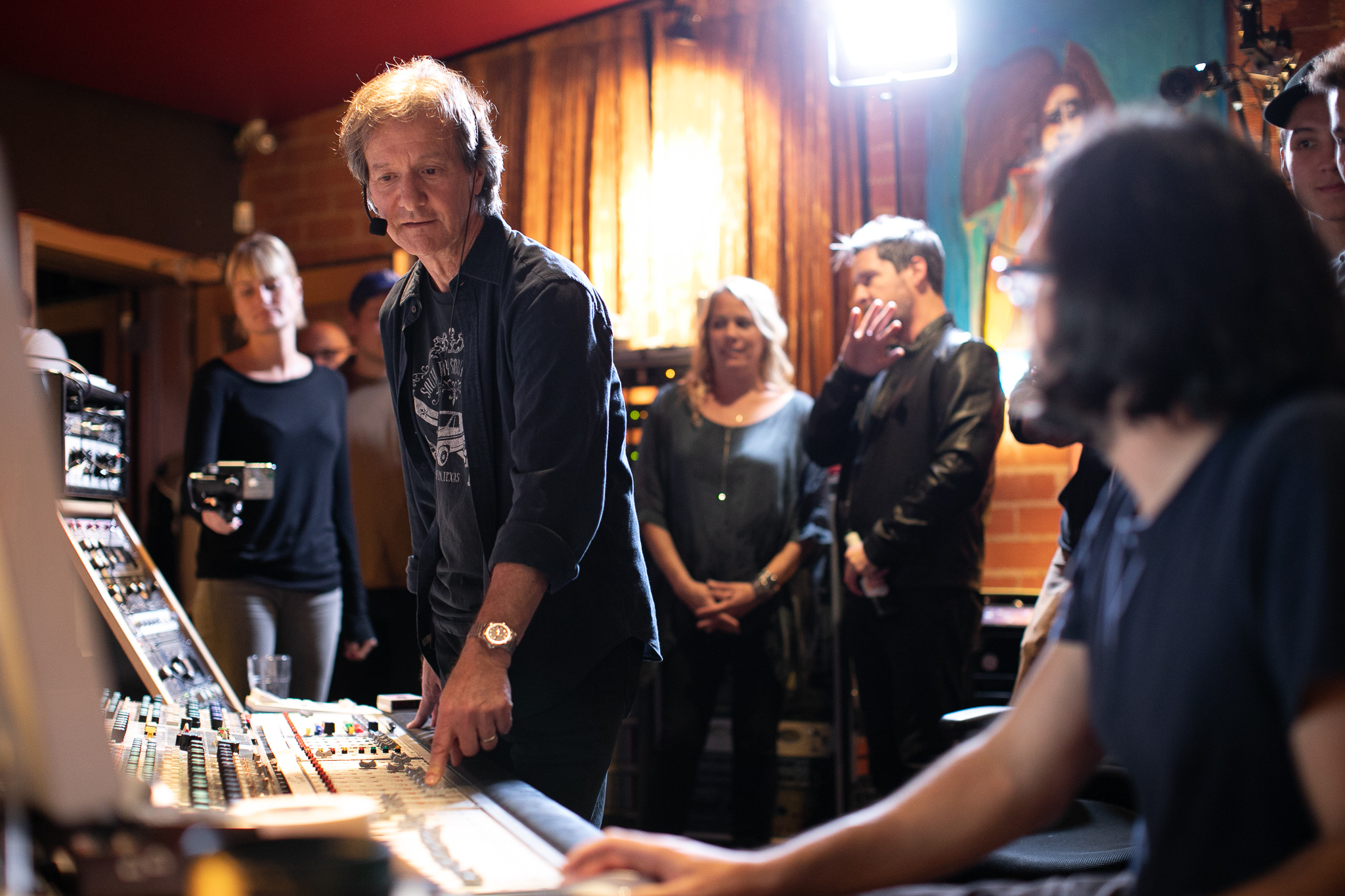 Since 1988, Chad Smith has been the drummer in the band Red Hot Chili Peppers. The group was inducted into the Rock and Roll Hall of Fame in 2012. Smith is also the drummer in Chickenfoot and in his all-instrumental Chad Smith’s Bombastic Meatbats.

Bob Clearmountain, Apogee’s studio founder and music industry legend has worked with: Bruce Springsteen mixing Springsteen’s Born in the U.S.A. and Tunnel of Love, The Rolling Stones with re-mixes of the singles “Miss You” and “Out of Tears” and their “Tattoo You” album, Bryan Adams, David Bowie’s “Let’s Dance”, Robbie Williams, Hall & Oates, The Corrs, Toto, Bon Jovi, Paul McCartney, Altered State, Simple Minds, The Pretenders, Roxy Music’s “Avalon” and over 200 other artists. 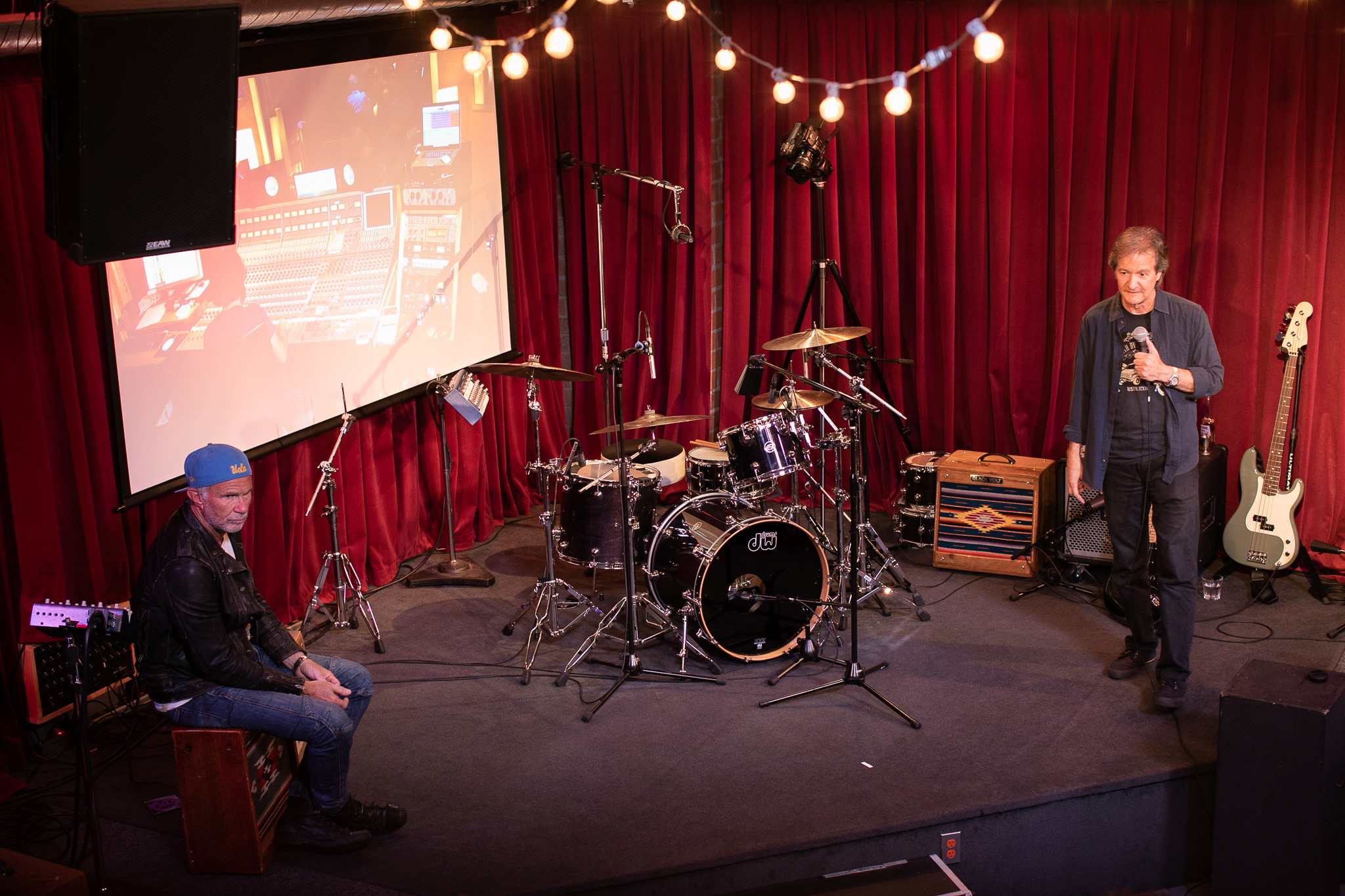 Apogee Studio in Santa Monica, CA is a recording studio and performance venue in the heart of Apogee’s solar powered headquarters.  The large space adjacent to the company’s offices and warehouse has been a host to legendary recording artists, up-and-coming artist showcases, and serves as “The Lab” for Apogee’s product development and testing.

In its short but impressive history artists such as John Fogerty, Mick Jagger & The Rolling Stones, Bryan Adams, Bruce Springsteen, John Mayer and many more have recorded and performed at Apogee Studio. 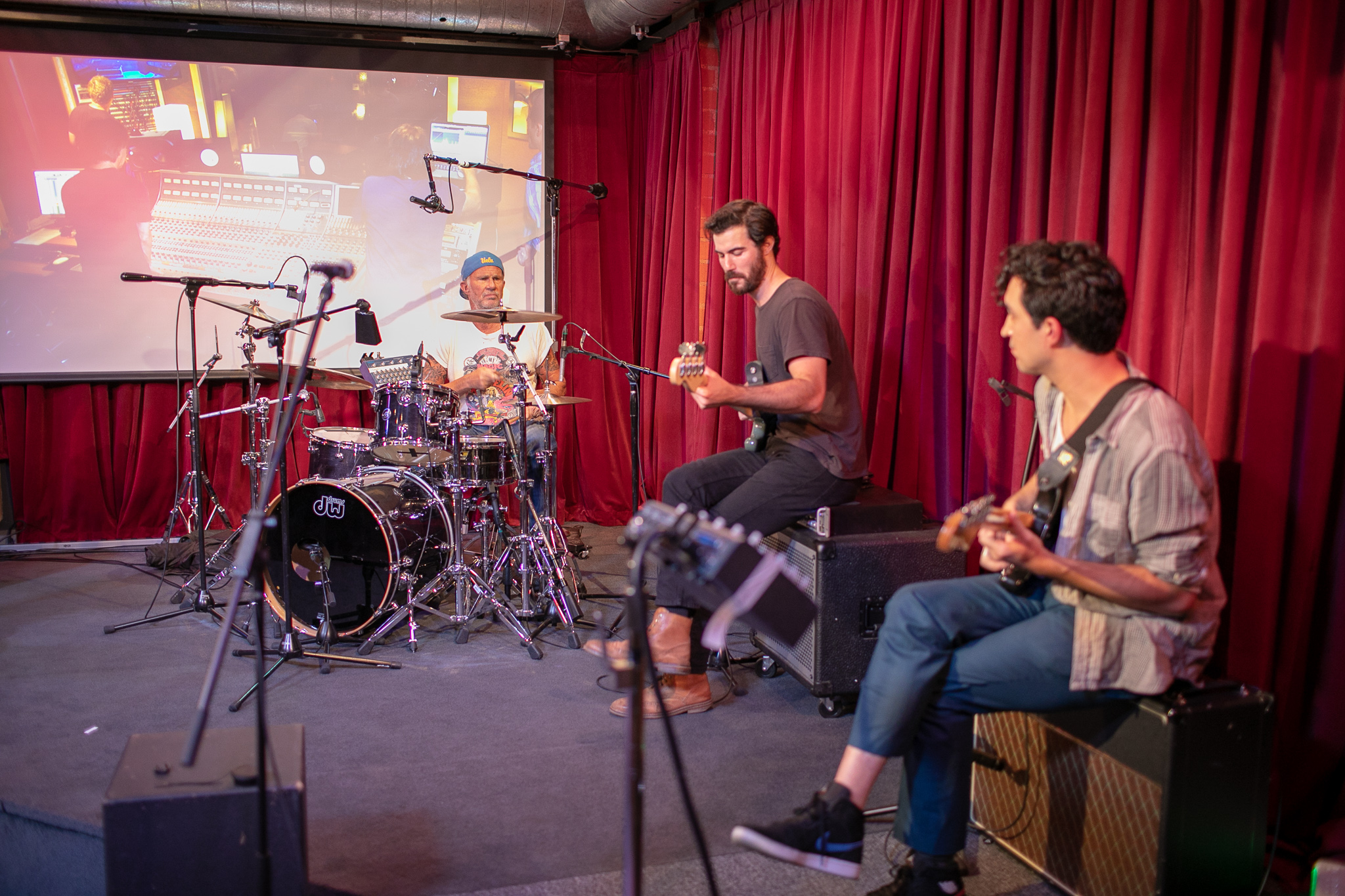