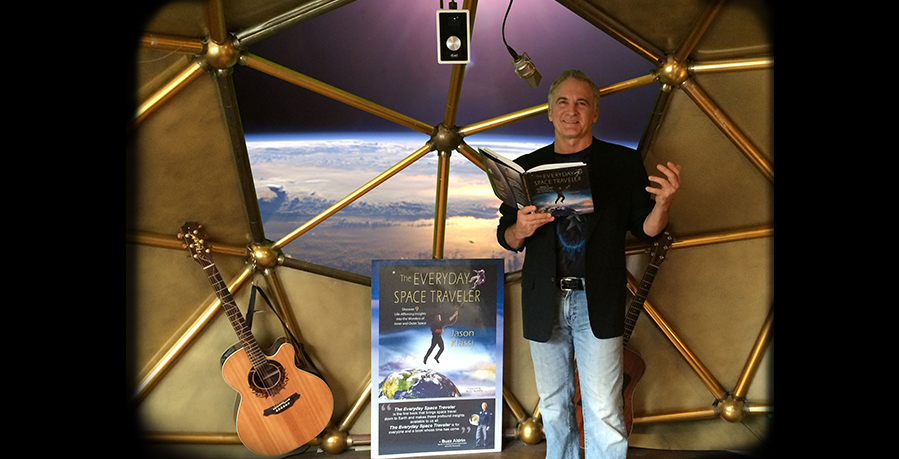 Our latest blog series – Customer Spotlight – calls attention to creative individuals around the world using Apogee products in unique and exciting ways. Our first spotlightee, author/documentary filmmaker/producer/composer and space travel enthusiast Jason Klassi certainly fits the bill. An Apogee Duet user, Jason combines his passion for space exploration and education with his deep love of music. Throughout his career as a film producer and author, Jason has scored and recorded soundtracks/audiobooks for many of his projects himself, from underwater soundscapes to colorful cosmic tones. His latest project, the award-winning book “The Everyday Space Traveler”, has garnered a number of accolades and features a foreword by none other than moonwalker Buzz Aldrin.

Apogee: How and when did you become interested in space travel?

Jason: I became interested in space travel back in 1979 when I first met astronaut Buzz Aldrin and started working on space station designs, lunar bases and space-themed entertainment attractions…I began making underwater documentaries with a Jacques Cousteau cinematographer in the 1980s – filming in the oceans, scoring original music and recording voice-overs.  Floating in inner space inspired my interest in outer space and my other love of music.

A: How far back does your music/recording history go?

J: I’ve been recording music since I first started playing in rock and jazz bands back in high school. I graduated from UCLA in Ethnomusicology.  I have recorded both the musical soundtracks and voice overs to many of my documentaries to original songs ranging from “Child of the Sea”, a song featuring humpback whale sounds to “Take My Love” featured in River Phoenix’s last movie with Sandra Bullock and directed by Peter Bogdanovich: “A Thing Called Love”.

A: What’s your setup like and how are you using your Apogee Duet these days?

J: In my apartment/studio I built a geodesic dome green-screen set to replicate the interior of the pilot-house of the “CosmicSea” spaceship. As you can see in the photo, we are in the midst of producing the Audio Book version of “The Everyday Space Traveler” using the Apogee Duet on our green-screen ‘spaceship’ set… This ‘Audio Theater’ project features narration, soundtrack music and special sound effects to tell the story of our journey to Mars. I use the Duet on the green-screen set of the spaceship “CosmicSea” or at live performances in various venues, whether I’m doing voice-overs or recording music.

A: Your stated goal is to educate and inspire those creating our future. What role do you think music can play in furthering this goal?

J: Music plays a critical role in the new educational programs known as STEAM++ (science, technology, engineering, arts and math, plus spoken and computer languages).  Music enhances the cognitive and intuitive development of an individual throughout their life.  The fundamental principles of the universe and humankind are also found in music: particle theory, resonance, wave patterns, mathematics, communication and even story-telling.