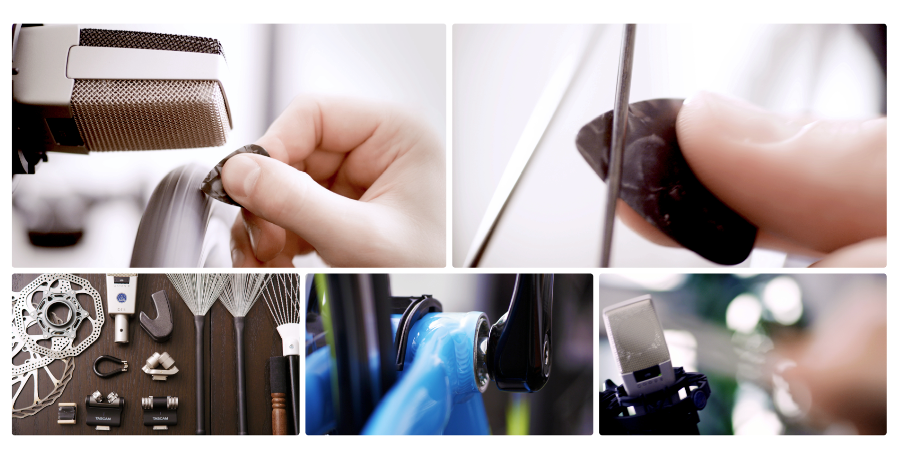 To composer JohnnyRandom (aka Flip Baber), bicycle parts hold all of the sonic weight and wonder of any musical instrument in the world. Luckily for us, he’s proven it. With his new single “Bespoken”, the daring producer transcends the role of traditional instrumentation in modern music by transforming his bicycle parts into a full-fledged orchestra. Baber’s carefully chosen sounds pulse with a breathtaking elegance in “Bespoken”. Swirls of hammered pedals, disc brake rotors and finely tuned spokes coalesce to send the listener on a triumphant, colorful journey. Trust me, you need to hear this.

Working from his modest home studio, JohnnyRandom enlisted the Apogee Duet to capture the sounds of his bicycle parts in all of their organic beauty. What you hear in “Bespoken” is predominantly the dry, untouched recordings of these sounds arranged in Logic Pro X. We sat down with the musician to get a closer look at the process and mind behind this pulsing, gorgeous soundscape.

How far back does Bespoken go? When did you formulate the idea, and when did you know you could pull it off?

Technically, around the time I started biking… The desire to manipulate a bike into music germinated then. I think I was about 4 when I traded up to a Huffy and started messing around with the spokes. It wasn’t until recently that I was satisfied enough with my results to compose an original work featuring bike sounds exclusively: Developments in audio recording technology served as a catalyst when I realized I could finally create what I had imagined. Higher sample rates, extremely sensitive contact microphones and improved quality of A/D conversion were essential for capturing overall clarity and harmonic nuances.

How did the composition and tone/color/rhythm of the piece take shape?

The tone started off as a mistake. One of my mallets accidentally fell on a mountain bike tire that was touching a live contact mic. It bounced in a pattern that was intriguing. That sound became the “kick drum” in 7/8 that laid the framework for everything else. I’m drawn to a very wide variety of music, but I think “Bespoken” was actually an attempt to create something I hadn’t heard yet. I’ve seen it compared to Radiohead, Sigur Rós, even Frank Zappa’s bike experiments on the “Steve Allen Show” in 1963. Zappa fans might be surprised to know how far back people have been making music with bicycles. Samuel Goss invented a musical bike in 1899 that looks like a cross between a xylophone, harp and a bike: www.google.com/patents/US634887

What kinds of obstacles did you run into while recording “Bespoken”?

Playing and recording the intrinsic beauty of found objects can be extremely time-consuming and obsessive, to say the least. The slightest adjustment in mic position or playing technique can have dramatic consequences. Even with some of my favorite composers, found object manipulation has often been presented as noisy, atonal or arhythmic. I wanted to create the sonic opposite of this, recorded at the highest resolution possible and arranged in a way that translated well into music.

Sustained-speed mountain bike tire knobs played with a guitar pick sounds very similar to a distorted electric bass guitar. Magnetoelectric Ebow on derailleur cable yielded loads of harmonic overtones and sustained textures. Disc brake rotors have incredible gong-like sounds that can sustain for 60 seconds or more. Probably the most beautiful and difficult sound to capture was the spokes: For each note, I would tune all of the spokes in a wheel to the same exact pitch to avoid unwanted overtones via sympathetic vibration. Tuned in unison, they sound gorgeous. It had to be a wheel with straight spokes too, with no crossovers. The first time I tried this is, it took an hour to capture just one note.

“A/D conversion quality vs. price point has evolved rapidly in the past 10 years and the Duet has been my favorite pairing of that ratio so far. Not only because it is so transparent and consistent, but also because it integrates so well with Logic Pro X. “

Describe your experience working with Duet for the creation of the song. How did your Duet compliment the recording process?

A/D conversion quality vs. price point has evolved rapidly in the past 10 years and the Duet has been my favorite pairing of that ratio so far. Not only because it is so transparent and consistent, but also because it integrates so well with Logic Pro X. There is a simplicity to the UX design of the physical interface that makes it very easy to work with too. My home studio is by design, extremely minimal. When fellow composers or mix engineers come by, they are always very surprised by the minimalism of my composing suite. Adjacent to the composing suite is a small isolation booth where everything was recorded for “Bespoken”.

Describe your process of mixing these sounds together and the steps you took to make it all happen.

The first step was to sift through thousands of sounds to figure out which ones had the best potential, musically. Only a small fraction of what was recorded made it into “Bespoken” for this reason. Everything was composed within the arrange window of Logic Pro X. DSP was kept to a minimum, because I didn’t want to lose the intrinsic quality of these sounds…especially the most recognizable ones. The majority are completely dry or have a touch of reverb, with one exception: The most conventional sounding element was a tuned/ebowed derailleur cable fed through a guitar amp to get some distortion/vibrato: www.soundcloud.com/johnnyrandom/derailleur-cables-ebow-2-aif-1 I’m certainly not a purist: I wanted to produce this composition in a manner which put the music first, without self-imposed limitations. That said, it is probably less enhanced than most modern music being produced today.

Now that you’ve released the track, what have you learned about recording, music, and yourself? What are you hoping for people to take away from it?

I’ve certainly learned some new mic techniques and creative solutions for taming odd overtones using everything from tape, putty, dental floss or rubber bands. If there was any lesson learned, it was to never give up if you really love something. The goal has always been to inspire others to explore the vast potential of their surroundings. If there’s a takeaway, I hope people hear “Bespoken” and never look at a bicycle the same way again.