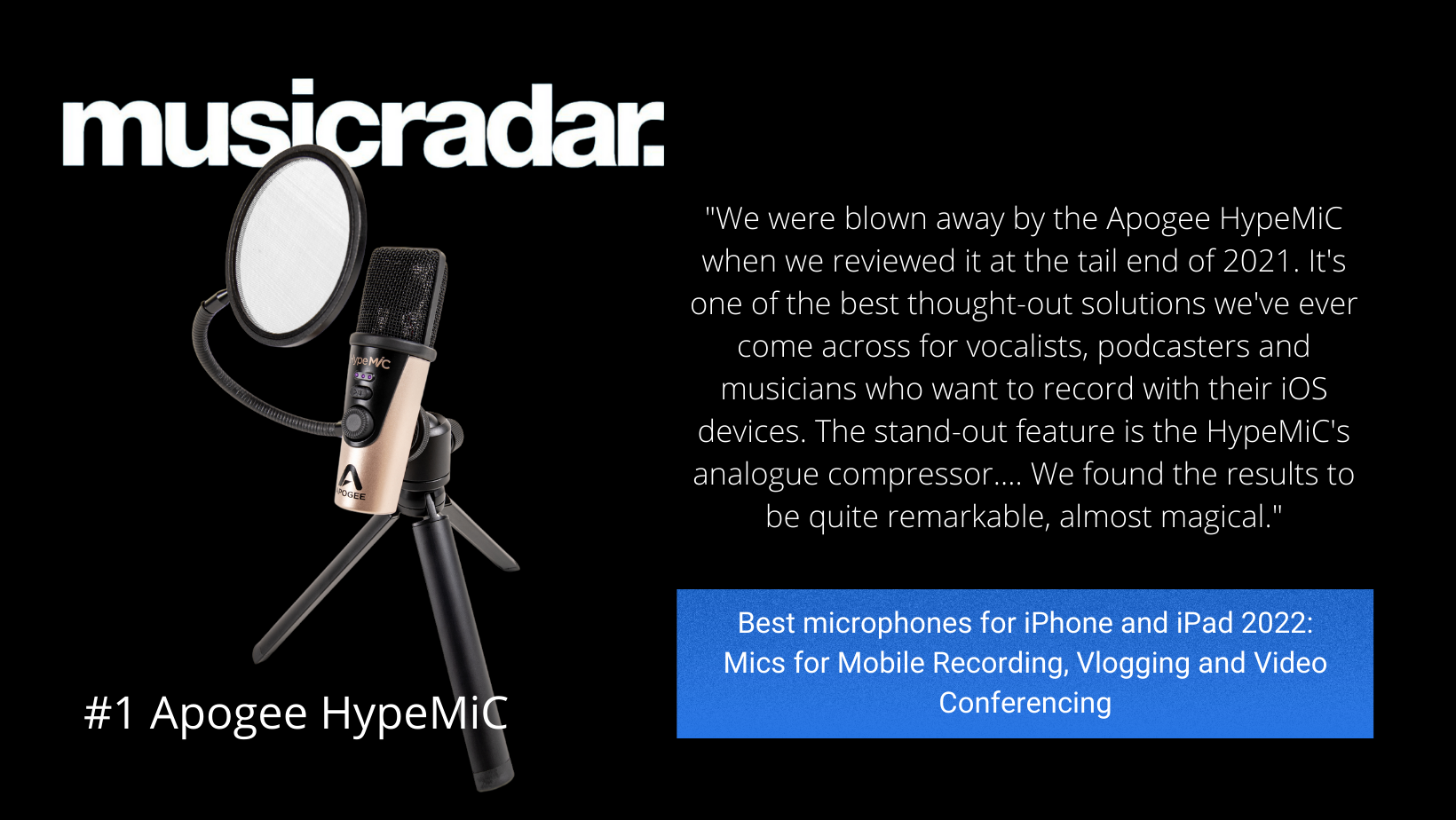 If you use an Apple device and you’re looking to do some recording, vlogging or video conferencing, then this guide to the best microphones for iPhone and iPad is your friend.

Apple’s latest iOS devices pack a real punch. The ludicrously fast, M1-powered iPad Pro series rivals – and in some cases outguns – many modern laptops and desktops. We can think of only one area in which these devices fall short, and that’s their onboard microphones.

To be fair, the quality isn’t too bad for making and taking one-to-one calls, because most iOS devices feature multiple microphones, and Apple’s engineers have also installed some very smart noise-cancelling technology. However, these miniaturized mics, hidden within their pinhead-sized ports, are pretty hopeless when it comes to doing anything meaningful.

Modern iOS devices – as well as those dating back a few years – are more than powerful enough to run some seriously capable audio software, including GarageBand, Cubasis, FL Studio and AUM. Adding live vocals has the potential to transform tracks created in these applications, but good luck with using the built-in mics.

We’re used to composers such as Jon Hopkins, Ryuichi Sakamoto and Finneas O’Connell putting their unique stamp on productions by adding ambient recordings, often of everyday objects. A few years ago, you would’ve needed a field recorder to accomplish this, but all you have to do now is download an app, such as Apogee’s wonderful MetaRecorder or the incredible TwistedWave. You will, however, need an external microphone to do it justice.

The same thing applies to vlogging and podcasting. Nobody has the patience to listen to hard-to-hear content (windblown interviews, noisy backgrounds, etc), so give your followers a break and invest in a decent mic.

You might also want to heed this advice if you attend daily Zoom calls and want to raise your voice above the clamor. Boosting your ROI with a microphone that’ll get you and your ideas heard could make all the difference to your career prospects.

The fact is, when it comes to audio, without a microphone we’re only realizing a fraction of what all of this incredibly powerful hardware and ingenious software can achieve. Read on to discover how a decent microphone can transform your iPhone or iPad.

If you’re serious about the quality of your audio, then Apogee HypeMic really takes some beating. Like all Apogee gear, it’s built to perform, and it doesn’t disappoint on any front. Its fully manual gain control and latency-free monitoring enable you to keep close tabs on your recording, but it remains a breeze to use – there’s nothing intimidating about using the HypeMiC whatsoever.

Of course, the icing on the cake is that incredible compressor. Somehow, it manages to add a whole new dimension to everything it touches.

We were blown away by the Apogee HypeMiC when we reviewed it at the tail end of 2021. It’s one of the best thought-out solutions we’ve ever come across for vocalists, podcasters and musicians who want to record with their iOS devices.

The stand-out feature is the HypeMiC’s analogue compressor, which evens out soft and loud sound sources. Three settings are available – Shape, Squeeze and Smash – each progressively adding more compression to your input. Real-world uses include everything from injecting life into delicate instrument recordings to isolating quiet vocals from busy backgrounds. We found the results to be quite remarkable, almost magical.

The HypeMiC also gives you fine control over the recording process. A chunky gain wheel enables easy and immediate gain adjustment, guided by a triple LED meter that lights up red when overloaded. The headphone port at the base of the HypeMiC provides the opportunity to directly monitor your input signal with zero latency, but you can also blend in the output from your DAW.

It’s not the cheapest product here – far from it – but the HypeMiC does ship with a neat travel case, a robust tripod and a pop filter. It also comes with a handful of cables that make it compatible with most iOS devices, Apple Macs and even Windows PCs.

As you’d expect from Apogee, this is a pro-quality mic, both in terms of build and sound, with a price tag to match.