How to record an electric guitar amp – Part 2

Alright now we’re going to talk about using more than one mic. I mentioned using different types of mics.

What’s been common lately, I’ve noticed, is using ribbons on guitar amps. The Royer ribbon, the 121, is a very common mic to use on guitar amps. I generally like to couple it with an SM57 so you can get that bright, edgy, more aggressive sound out of the 57 and the ribbon will give you more rounded warmer sound and sometimes that way once you get to the mix you can use either one depending on the guitar’s contribution to the big picture of the mix. Or sometimes a combination can work you can get somewhere in between and it gives you quite a wide range of different sounds to use later on.

As far as placing the mic, it’s really to taste. Generally I just have this ribbon pointing directly at the speaker, the 57 I have slightly off axis to the other speaker. You can put them on the same speaker if you want, it doesn’t make a lot of difference. What does make a difference is the proximity because you get that off of both mics. You get a warmer sound the closer ou get it to the speaker, you get a harder sound the farther away you get it. So if you want a warmer sound because you are using a ribbon, you probably want it pretty close, but not so close that it’s touching the grill cloth because then you might get a little buzzing noise or something just from that vibration. Other than that there really isn’t much to it.

There’s another way I’ve done it in the past where if you have an amp like this that has an open back you can put one mic in the back and that’s a completely different sound. If you’re going to do that you’re usually going to want to flip the phase on one of them because the one in the front is getting a positive push where the one at the back at the same time is getting a negative so you’re going to want to flip the phase on one of them. But that’s a valid thing too, it’s just you got to, it’s something to play with it’s one of the fun things about recording guitars is trying different things and seeing what you can come up with, and hopefully you have time and enough microphones to do it. This is a place to start though, this is a really sort of a standard way that a lot of recording engineers use.

Yeah cool, that was good. You passed the audition. 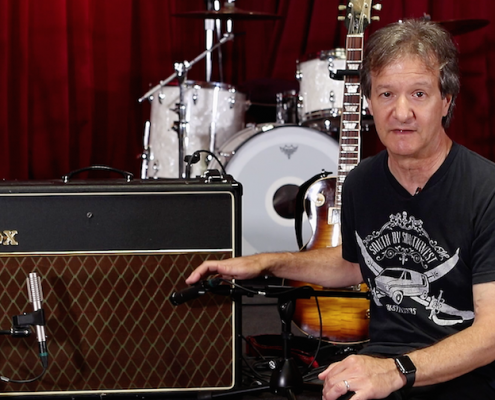 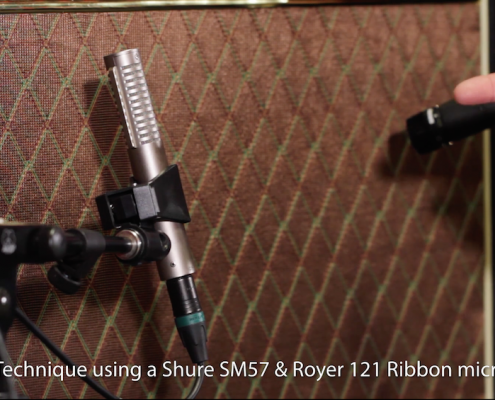 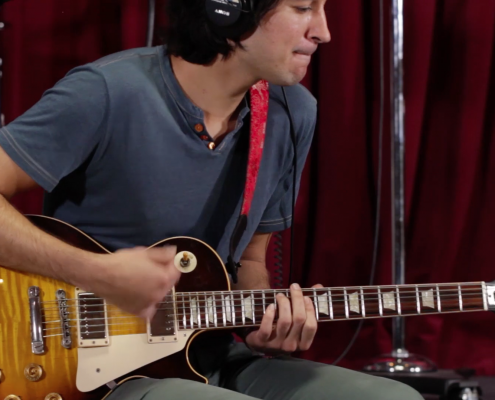