Behind Jay-Z’s illustrious mixing desk sits Gimel “Young Guru” Keaton, a man who has earned his master-status name in the Roc-a-Fella family after a decade of recording and engineering hits for the patriarch of hip hop. Jay-Z’s sound is more than a vocal; it’s an empire- one that stretches far beyond music into the undercurrent of a much larger and impressionable culture. After exclusively recording his vocal tracks for so many years, no one knows the intricacies of Jay-Z’s voice and what it takes to capture his signature sound better than Young Guru. At Roc Da Mic Studio in New York City, the talented and insightful Young Guru, as his name suggests, talked about how Apogee’s new Symphony I/O flagship interface has changed his workflow.

What Symphony I/O features are you drawn to?

“Obviously that you can use it for Logic and Pro Tools. Someone should have thought of that a long time ago, to run Pro Tools HD and Logic, or anything native, on the same system, to be able to switch between HD Pro Tools and another native system is incredible.”

How would you compare the listening experience with Symphony I/O to your previous workstation?

“I loaded up some of my past sessions that I had used with another system, and it sounds 100% better coming out of the Symphony I/O converter.” 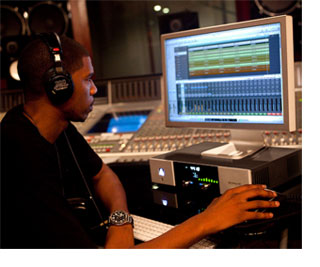 I notice that the kicks hit a lot harder without being as loud, and I’m feeling a punch in the kick at a lower level. In my previous system, I’d have to turn it up a lot louder to get it to hit that hard. There’s an extra clarity to me in the top end, anywhere from above… It’s not the 10K, it’s above that, about 14 or 15K… it’s not air, I would just call it a clarity.”

“There’s a tightness in the sound that enhances everything. Kicks have more punch, snares have more hit, vocals stick out without you having to turn them up, and enhances the natural frequency of whatever the sound source you’re dealing with. It’s like taking a session and adding a clock- everything just sounds more in place sonically and where it’s supposed to be. It’s almost like what a compressor does to the master bus, it just sounds like a record.”

Have you spent a lot of time comparing converters?

“Yes, too much! I listen to converters with an album I know real well, either Low End Theory, the Original Chronic or Chronic 2001. If I was throwing in something else I’d throw in Blueprint, it’s almost perfect. These are my tester albums, and a good pair of headphones. I like doing it in headphones because I’m not affected by the acoustics of the store, the other things going on. Just learn your headphones. Different songs do different things. Dre has so much of everything, guitars, synths, horns, so much live stuff, it’s easy for me to pick out that this converter is doing that, too bright, too dull. You can hear from the beginning the difference with Symphony I/O.”

What setup would you recommend for up and coming producers and engineers who want the best sound quality and tools for making music?

“Education is key.  You have to learn the microphones and pre amps. It’s not the case of there being just one best thing but most people can’t buy ten best microphones. People don’t make the guys in the stores work hard enough, people do their research outside the stores, just ask friends, but that guy might do things different than you. When you walk into a store, you should take a pair of headphones you know and listen to the microphones, the pre amp, the converter, as all of that is going to make a difference to the sound quality.”

Why do you think sound quality is so important to what you do and the success of your work?

“When hip hop started out, the sound quality wasn’t the most important thing.  Then we had Tribe Called Quest who changed how much bass was supposed to be in a record, and then Dre came with The Chronic and had a clarity in the top end that no one else had achieved. Now for us, it’s just as important for the fidelity to be comparable to any other genre of music. Every year, we want to broaden who the music is for, as it’s looked at by a lot of other people that may or may not understand hip hop.”

“For me, personally, it’s my work. I want to be compared to people that came before me who I respect, like Bob Clearmountain and Tony Maserati.”

“Because it’s Jay, the presentation of everything has to be top notch at every step. Most people can present their music in the end stage, but being that we collaborate with so many people, the quality has to be as high as possible at every stage. It may go to Jack White or it may go to Kanye, and it can’t be demo quality. Sound quality is important because Jay-Z is the vanguard of what we do in hip hop. It’s about pushing and expanding the music, not about how many more platinum records we have. That’s why I chose Symphony I/O.”