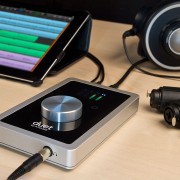 First introduced in 2007, the original Duet was a 2 IN x 2 OUT FireWire Audio Interface for Mac and became one of the most popular audio interfaces of all time, starting a home studio revolution and winning many industry awards and accolades. Duet received an upgrade in May of 2011 when Duet 2 took its place with a new 2 IN x 4 OUT format, redesigned AD/DA conversion and mic preamps, and USB 2.0 Mac connectivity. The new Duet for iPad and Mac builds on this legacy by offering the same professional quality as the Duet 2 for the iPad based personal studio.

“Apogee has pioneered professional digital recording on iPad and iOS devices with products like JAM, our studio quality guitar input, and MiC, the first studio quality digital microphone for iPad and iPhone. We are now taking the next step, offering a range of professional multi-channel recording solutions for iPad and all iOS devices,” says Apogee CEO and Co-Founder Betty Bennett. “Enabling amazing products like Duet to be directly connected to the increasingly powerful iPad and all other iOS devices, seamlessly integrated with apps like GarageBand and Auria, controlled with our Maestro software allows you take mobile music creation to the next level. It truly is a new frontier for the personal studio and we’re proud to be at the forefront.”

Duet for iPad and Mac – Highlights 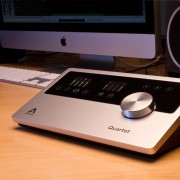 Santa Monica, CA – September 4, 2012 – Apogee Electronics today unveiled Quartet, the ultimate desktop audio interface and control center for Mac. Featuring four inputs, eight outputs, MIDI, top panel display and control, Quartet sets a new standard in performance and connectivity for the modern studio.
With ample input and output connections, the signature single controller knob, QuickTouch pads, and Apogee’s conversion technology, Quartet delivers where it counts; sound, functionality and usability.
Quartet connects to any Mac via USB 2.0 high-speed for extremely low-latency and stellar performance. From MacBook Air to Mac Pro, Quartet easily connects at amazingly high-speeds no matter the machine or sample rate; 44.1-192kHz.
Quartet’s four combination inputs offer microphone, instrument and line input with an exceptional gain range of up to 75 dB, leaving plenty of headroom for demanding microphones and sound sources. For additional channels, Quartet’s eight digital inputs create the option of connecting an external interface, like the Apogee Ensemble.
Quartet’s six balanced outputs deliver options for the video producer to mix in surround, the live performer to send multiple mixes to monitors and front-of-house and the mixer to send a mix to outboard compressors and EQs. Using Apogee’s Maestro software, the outputs will also split into three stereo pairs for connecting three speaker sets for auditioning mixes across various types of studio monitors.
A first for an Apogee audio interface, Quartet includes a USB MIDI connection for connecting a keyboard, synth or DJ controller. This feature consolidates all gear connections away from the Mac, making Quartet the control center for any studio.
“We are excited to announce Quartet”, says Apogee CEO and Co-Founder Betty Bennett. “Quartet offers a highly requested I/O configuration, award-winning sound and sleek design, all at an affordable price. We have listened to our customers and have designed Quartet with their requests in mind. At Apogee, we are all about delivering the absolutely best in sound, design and functionality and believe Quartet is a winner on every front.” 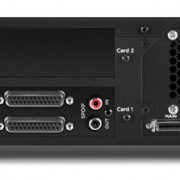 Today, Apogee announced the new 16×16 I/O Module for Symphony I/O, Apogee’s best sounding interface to date. The latest addition to the Symphony I/O module line-up features 16 analog inputs, 16 analog outputs as well as 2 channels of SPDIF. The new design is a break-through in converter design as it is now possible to pack 32 channels of premium Apogee conversion into one Symphony I/O (two module spaces per chassis), a feature not available in any other converter on the market.