Since bringing it home way back in 2007, seasoned drummer and producer Steve Sidelnyk has developed a dear friendship with his Apogee Duet. Whether he’s working on songs with Moby, drum-programming for Pharrell or performing on tour with Madonna, the UK-based musical mastermind keeps Duet by his side to tackle just about any task he faces while working with some of the biggest recording artists in the world. We’re not kidding around when we say this guy has serious chops… just take a look at his credits. As true admirers of his work, we at Apogee are proud to present this compelling interview with our latest spotlight artist. 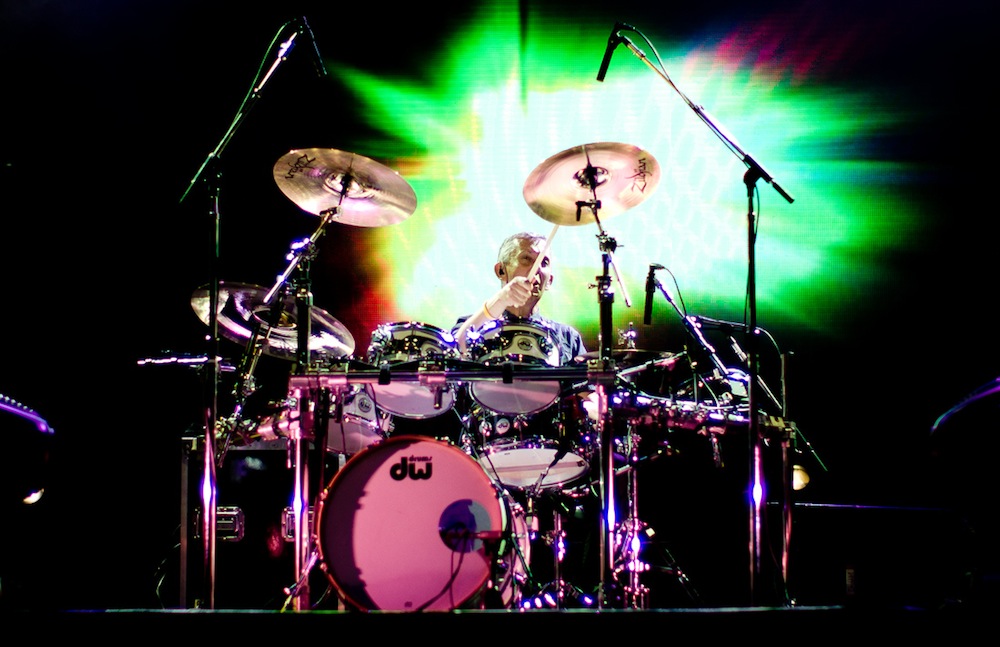 Apogee: Since you’ve been using the Apogee Duet daily since 2007; what has been the most rewarding perk(s) of your Duet as a professional drummer/ musician?

Steve Sidelnyk: When I bought my computer in 2007 I had been using a tower and was finding that I was constantly moving it to sessions and rehearsals so I decided to plump for a laptop. I wanted to be portable yet still wanted to be able to use it to record instruments and vocals as well as microphones to record rehearsals straight to hard drive. My friend Dave Russell (who is Lady Gaga’s engineer) recommended that I get the Apogee Duet and to be honest I haven’t looked back since.

A: How do you utilize your Duet? Ex: Do you typically use Duet for studio recording, live recording or both?

SS: I pretty much use it for everything I have ever programmed or wrote since 2007. Its very easy to turn up to a studio with pretty much everything in one backpack and be totally self-sufficient on monitoring as I tend to do a lot of programming on headphones whilst working in the control room or another part of the studio. So I really use it more in the studio but it travels everywhere with me and I can record any ideas I have too.

A: In your long & successful career, what have you recorded specifically using your Apogee Duet?

SS: Well in 2007 I had just bought the Duet as part of my new system and I was straight into drum-programming on the DIDO album and that was a situation where I was working at Westlake Studios in West Hollywood and the room where I was working was apparently built for Michael Jackson’s monkey: Bubbles……..Hahahaha I think that is the honest truth!

Then I did a three year stint with Seal both playing drums and programming on albums whilst always doing projects on the road with my Duet and sending files back and forth to the UK. I for sure used it on MOBY’s new album Innocents where I was sending files from my little writing room and then working at his home. Just did additional drum-programming on the Ed Sheeran/Pharrell number 1 ‘Sing’ with Mark ‘Spike’ Stent and for him also the new singles by David Gray and Damien Rice.

I tend to get asked to do projects where they want a musician to program and play also which is a rather unusual niche but one I’m happy to fill!

A: Do you record your drums with Duet and 2 microphones? If so,what’s your typical strategy? What other instruments have you recorded using Duet?

SS: I record my live kit with basically two mics going directly into the DUET via the breakout leads inputs and have used this method to record many tracks that we’ve either kept or mixed with a sample within Logic later. Always using the live drum track as the primary sound and embellishing the kick with a sub kick sound. I use a SHURE PG52 kick drum mic just laying on the pillow in the bass drum and I have a mike stand that basically has a SHURE SM57 just pointing down from overhead and in this case I tend to use NO cymbals and either overdub afterwards or use the many wonderful cymbal sounds from either Superior Drummer 2 or EasyDrummer. Apart from drums I basically use the DI mode and a Fender Mustang Bass for bass ideas and even some guitar tracks but using a POD to get the input at a correct level…the bass takes care of itself so just straight in. Vocals also recorded straight in and compression etc dealt with in Logic X.

A: I see that not only are you a professional drummer but also a co-producer and songwriter as well. Tell us more! How has your prolific career evolved over the years?

SS: I started off as a bedroom musician and was lucky enough to play with some great bands and musicians whilst still at school. I was playing in the punk/new wave scene in the North of England and after dropping out of school at an early age I re-located to London to pursue my dream of being in music full-time. I was in a band with a school-friend in London and had a deal at 17 and always went to auditions and got a job playing for the Style Council (Paul Weller) in 1983! It was an amazing time in music because technology had just become semi-affordable after the years of the Fairlight so I yearned to use electronic percussion to add to my palette of sounds. After the Style Council I got a job playing with a band called The Blow Monkeys in 1986 and we supported Robert Palmer on his Addicted to Love tour. They were using samplers and thats what I bought with all the money I earned. That went directly into supporting The Psychedelic Furs on the Pretty in Pink tour and came back to the UK. Started sampling and then became in demand as somebody who knew how to play and use sounds that people were using on their records so things started to open up for me. I worked with Aztec Camera, Robert Fripp and Toyah, Bros and then started to remix and produce with my friend Marius Devries whom was the keyboard player with The Blow Monkeys. After 4 years in the studio I was programming a tour for PRIMAL SCREAM when I got asked to take the drum chair…we supported Depeche Mode on the Songs of Faith and Devotion tour in 1994.

I went on to work with Massive Attack as programmer/drummer in 1996 and also The Verve as percussionist in 1998. Marius had gone full on into production and I worked with him on two tracks on Madonna’s album Ray of Light. We worked together writing and programming and then I was asked to play drums for Madonna. It involved a lot of sampling and the first tour I did I used NO acoustic drums or cymbals. I carried on working with her till 2007 but always kept busy in my off time programming and writing, and that took me right to where I got my first truly portable audio interface: my trusty DUET by APOGEE : O )